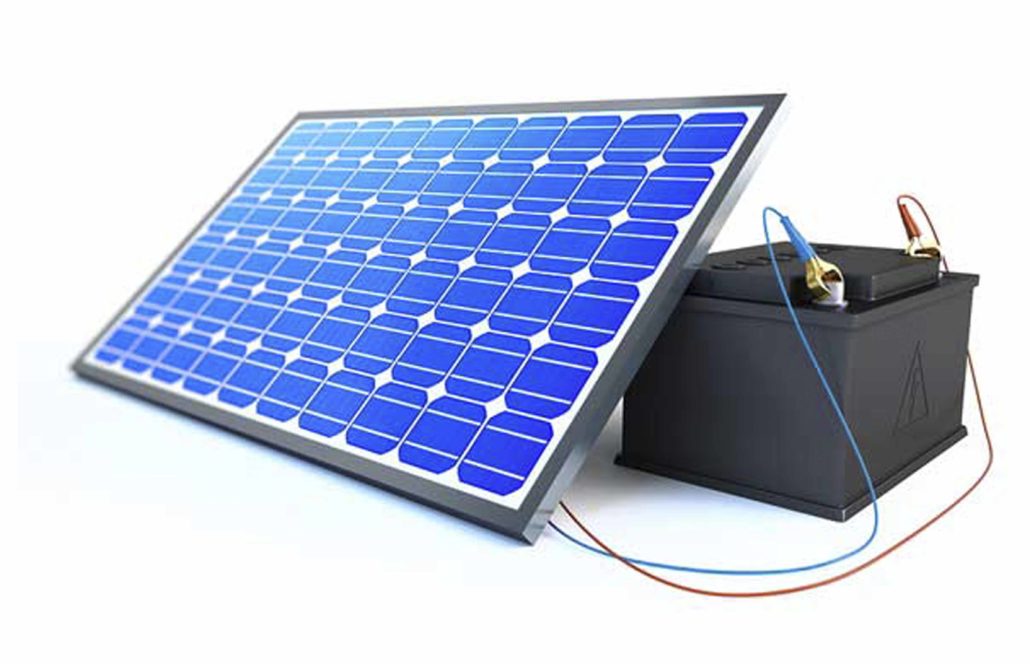 The battery you choose to capture the solar energy from your system is important. Solar panels only allow for power when there is sunlight – so what happens when the sun goes down. Battery or batteries are needed to ensure power is provided to your devices/appliances/lights etc as and when needed at night.  Solar-generated electricity charges the batteries during the day, usually through a charge controller. In a grid-backup or enhanced self-consumption solar PV system, there are two types of battery commonly chosen  – Lead-Acid or Lithium-Ion.

There are many factors that influence the life cycle of a battery so it’s almost impossible to estimate how long a given battery will last. These factors include battery type, the number of charging/recharging cycles, operating conditions, like temperature, and how fully the battery was discharged, among others.

There are a number of good batteries on the market but they are not always in stock due to high demand. We stick to the brands and suppliers we know are reliable, have good after-sales support and offer solid warranties. Be aware that not all batteries on the market do what they say they do. There are a number of poor quality knock-off products on the market, so be cautious if a battery seems too cheap. The batteries listed on our catalogue are not listed in any particular order, quality, availability or price. 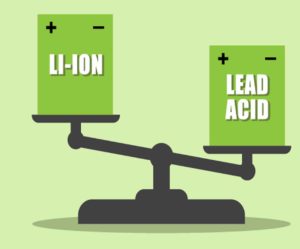 Lithium-ion batteries are built on much newer technology and are low maintenance. Their biggest advantage is their significantly improved lifespan, with faster charge and discharge times across their capacities.

They have an improved depth of discharge * and lose less capacity to irregular discharging. They are light, compact, easy to install and easier to dispose of.

They perform well both in colder and hotter temperatures. But they cost much more upfront than lead-acid. The longer lifecycle of this battery means that despite a higher initial investment, the battery may well cost less over its lifecycle.

* A battery’s depth of discharge (DoD) indicates the percentage of the battery that has been discharged relative to the overall capacity of the battery.

Lead-acid batteries have been used to provide backup power for solar homes since the 1970s. While they’re similar to conventional car batteries, the batteries used for home energy storage are called deep-cycle batteries since they can be discharged and recharged to greater levels than the batteries in most cars and trucks.

One major downfall of the lead-acid solar battery is that its power capacity drops significantly in colder temperatures. Additionally, they are big, bulky and difficult to maintain.

Offer a gross storage capacity of 100Ah – 200Ah @ 12V or 1.2kWh – 2.4kWh. The batteries may be connected in a series for a higher voltage and/or in parallel for greater capacity at the same voltage. They are suitable for a residential grid-backup solution depending on how long the household needs to run off-grid and the total power of the loads (devices, appliances, etc) to be supported.

These are typically are supplied as self-contained units with a built-in battery management system (BMS). Gross capacities vary from about 2kWh up to 8 – 10kWh depending on the model and manufacturer. Some models may be connected in parallel, others may be extended with expansion packs. They need to be fully supported by the software in the battery charger/inverter chosen.

There is a close relationship between the amount of the total battery capacity that is used each day and the life of the battery as expressed by the number of cycles. Typically it is recommended to only discharge a lead-acid battery down to about 50% of the total capacity of a lead-acid battery. This is referred to as a 50% Depth of Discharge (DOD). This makes the storage capacity available for daily use only 50% of the gross storage capacity.

Most lithium-ion batteries have a full cycle efficiency of around 95% even for a cycle from their full depth of discharge up to full capacity. This makes them ideally suitable for daily use applications like solar PV systems which need to use most or all of their retained energy in the evening/night and then they charge up again fully during the day.

The number of cycles that a lead-acid battery can be used for is directly related to the amount of energy charged and discharged in each cycle. With a system configured to utilise 50% of the gross storage capacity on a daily basis, a typical lead-acid battery will have a lifetime of 2,000 – 2,500 cycles. Allowing for some degradation over the life of the battery, a useful lifespan of about 5 years from a well-designed system may be expected.

A good quality lithium-ion battery may have a lifetime of 5,000 – 7,000 cycles which is considerably more than 10 years of normal usage. The built-in battery management system will ensure that the battery condition is always optimally and a full 10-year life may be expected from the battery.

The initial cost of a lithium-ion battery could be 2 to 3 times more expensive per kWh (kilowatt hour) of gross capacity compared to a similar sized lead-acid battery. But when comparing the Rand per kWh of usable capacity, the difference will typically only be about 1.5 times as expensive. The lithium-ion battery will last twice as long as the lead-acid so over a 10 year period the lithium-ion will almost always be a cheaper option with no need to renew the battery after 5 years.

A lead-acid battery may weigh between 70kg and 80kg per kWh of usable capacity. So a typical 5kWh – 6kWh domestic battery pack may weight in excess of 350kg, which may make it difficult to locate a large battery pack in a residential property as a strong floor will be required.

A good quality lithium-ion battery pack will typically weigh between 10kg and 15kg per kWh of usable capacity so considerably less than an equivalent lead-acid pack. But a typically residential battery pack will still weigh 75kg – 100kg requiring some consideration as to where to place it.

Most lithium-ion batteries have a relatively restricted charge/discharge rate often needing 3 – 4 hours to charge and a maximum discharge rate of between 1kW and 2kW for a typical residential system. Thus a system using lithium-ion batteries needs to be designed to only connect essential loads to the circuit that will be powered from the battery pack.

Lithium-ion is less impacted by moderate temperature changes and ambient temperatures in the range of 15 to 30 degrees Celcius will not significantly impact the lifetime nor the performance of the battery.